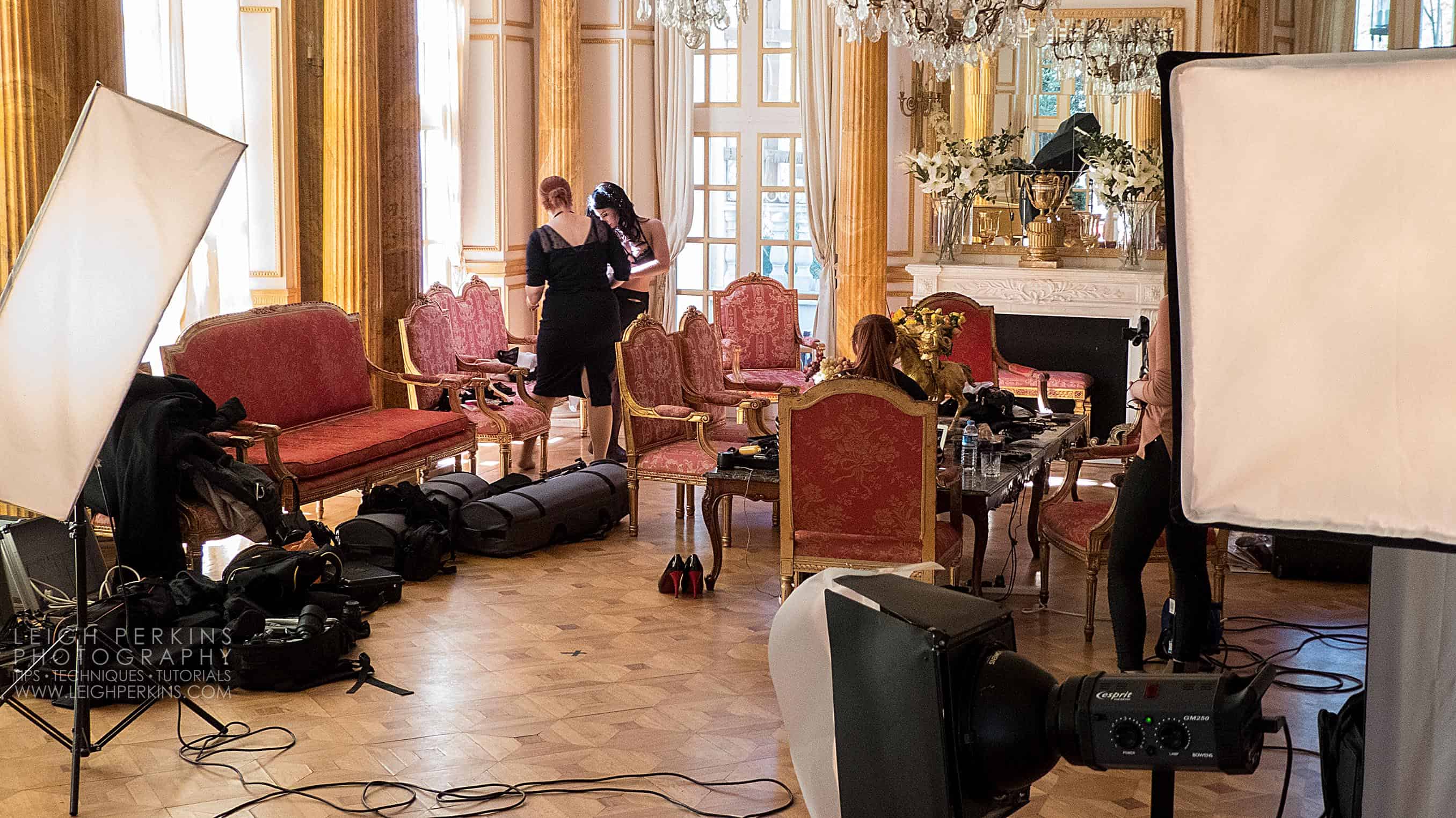 Working on location nearly always presents us with a few curveballs. Planning for the unexpected is of course almost impossible simply because of the unexpectedness of it. This shoot was certainly no exception. This was a lingerie shoot for a new online retailer and as always I had planned as best I could and as always travelled with at least twice as much kit as I would need – just in case! Studio flash heads, Redhead continuous lighting and LED panels would mean that I certainly wasn’t going to be short of lights whatever the location presented me with. As it happened the location was a stunning “palace” with more gold leaf, marble columns and ornate features than you could shake the proverbial stick at. Our chosen room had vast floor-to-ceiling windows which produced more daylight than I ever thought possible in the London suburbs in early March. In fact the strong, harsh, spring sunlight was way too much for what was essentially a product catalogue shoot. Enter the black out fabric that I never leave home without! Sunlight is lovely but it can also be right royal pain in the arse if it’s in the wrong place at the wrong time.

Arriving at the location after a two hour commute through the west London traffic with exactly two minutes to spare meant an early metaphorical pat on the back for me and given that I had Roxy, our model for the day travelling with me eliminated any fears of her arriving late. More back pats. My make up artist had also arrived a minute earlier and had been kind enough to let me blag some space in her car for more of my probably un-needed kit.

So far so good. The building site next door to our location didn’t justify too big a rise in blood pressure but a cursory glance at the trail of electrical cables running up the driveway to our “studio” certainly grabbed my attention. Arriving at the entrance to the building, seeing the small but surprisingly loud generator three feet from the grand entrance started my mind racing. Already calculating my wattage usage, I stepped into the grandeur of our home for the day with a mixture of awe and inspiration. Then utter dismay as a very pleasant and cheerful Polish lady informed me that the power was certainly well and truly out and pointed toward a woefully inadequate extension socket running from the generator!

Of course, given an inexhaustible budget we would have travelled with a small fleet of vehicles one of which would have provided enough power to run an outside broadcast unit for the BBC. This project however was not blessed with such a budget. The LED panels could run off batteries of course but given the vast amount of daylight flooding the room the LEDs would be no match for the sun so all that lovely sunshine would need blacking out before we could even think about setting those up.

With power out in the whole street there wasn’t even the possibility of blagging a bit of power from a nearby building! We discovered that the utilities company had promised a truck sized generator but there was no way to get it to the main building due the entrance archway that was only just big enough to get our cars through! Just my luck. ??‍♂️

OK, nothing for it but to throw some lights up and see what this compact little generator could output. Could I manage with three lights? Hmmm, I’d rather have four! Two for the model, two for the background, bang in a reflector and I think that’ll do it. The maths are spinning in my head as we set about putting the stands up. In fact I can barely remember doing much in the way of set up. Either because of being deep in concentration working out how I’m hoping to salvage the shoot, but more likely because I didn’t actually do anything. Before I knew it, Zena had emptied the car, light stands were vertical, laptops, chargers and cameras were freed from their carry cases and the familiarity of a temporary studio was in place. Make up artist was in situ, briefed by the client and Roxy was in her gown being airbrushed, plucked and curled.

With great trepidation I turned each light on in turn knowing that each one was probably only pulling in around 200watts, but also knowing that the acid test was actually firing all four units together. Could this generator feed all four hungry units as they re-charged in unison, I was dubious. Fingers crossed and with all units powered on, wireless receivers activated, I depressed the test button to trigger the lights. Boom, the room was lit for a micro second with my main image-creating ingredient. The volume of the generator engine dropped by a good half. I waited for the stutter and the stall but miraculously, just as the stutter was about to turn into a splutter, the genny kicked back into life, picked up the revs and the lights remained alive. ? The whole sequence seemed to last for an age when in fact probably only half a second passed. All four lights had fired, discharged their juice and recharged ready for more action. The generator had coped! A couple more firings confirmed we were in business. The logical me knew that if it worked once and nothing else changed then we were good for the day barring any other mishaps. Relieved, we carried on with setup only pausing when someone threatened to plug in their iPhone for re-charging. Could another milliamp take us over the edge? Unlikely but I wasn’t taking any chances.

Once we had had a bit more discussion with the client, things got even better. We chose the background for the shoot and agreed that as this was a product shoot, consistency was the name of the game. No moving from room to room, no lights to shift, so nice and simple. Whilst the room was stunningly beautiful, we really only wanted it as non-distracting, scene-setting background. Pulling the model away from the background and working at a widish aperture would achieve this. I knew I could drop the power of the flash units right down and mix the strobes with the available daylight being diffused through the now drawn curtains. We might be able to charge our phones yet! ?With a good forecast, south facing windows and a sunset way past our finish time, lighting was no longer an issue.

With Roxy now fully made-up we could get some test shots underway. This is where the experience kicks in and I was gratified to see the first test shot was right on the money. The daylight/flash balance – spot on. The highlight kick off the side of her body – perfect. The background focus drift – blurred to perfection. All that was needed now was a few practice poses to completely understand the lighting, the shadows and the best look for the lingerie.

A big tip here that I learned long ago is when you’re looking for consistency from shot to shot as in product photography, mark everything and I mean everything before some clumsy oik moves something for you. I lose count of the number of rolls of electrical tape I carry but they get used each and every time. A cross on the floor for the model to position herself on, each leg of lighting stands marked with tape, a line on the floor for the photographer to stand – nay two lines, one for each choice of lens and we’re good to go.

And so with test shots completed, client visibly clearly very happy with what she’s seeing on the Mac screen, it was shoot time. It was a little like a production line but time is money and consistency was the name of the game. Everything flowed like clockwork for a good hour until someone suggested lunch. Normally that would be me as I have the stomach capacity of small rodent. Eating little and often is inconvenient but necessary in avoiding a grumpy me. In this case it was the client and Roxy certainly needed sustenance if she was going to carry on at this rate of knots. Lunch was called and everyone chilled and munched, cheered by the comfort of knowing we had avoided a proper banana skin with the power outage.

Never underestimate the power of the banana skin! Lunch all but complete, I cheerily remarked how quiet things had become. Oh and dark! Our modelling lights were visibly dimming in unison with the decreasing volume of the generator before finally they all gave out together and silence reigned. My internal dialogue cursed at the need for humans to eat. We’d just given forty five minutes of generator time to the munchies and now it was a waiting game as apparently only the utility company can top up the generators depleted fuel tank! Arrrrg, we’d fuelled ourselves but not our power source, rookie mistake!

A thirty minute extension to lunch and after a few impromptu arse-covering daylight shots, two engineers arrived and informed us that the power was now back on and the generator was surplus to requirements. They seemed doubly keen to check that everything was in working order and safe for us to continue. Which I’m sure had nothing at all to do with the sight of our near naked model prepping herself for the continuation of the shoot.

Power restored then, we continued without further incident and by four thirty in the afternoon we had worked our way through a plethora of bras, knickers, stockings and suspenders until finally we were done.

Being a photographer is not just about lighting, directing models and taking pictures. It’s also about being a problem solver, a project planner, a computer engineer, a diplomat and a whole host of other roles. On this job the photography was by far the least stressful part of the project but then I guess that’s the way it should be because after all, that’s what I do.

Palace Shoot – Behind The Scenes