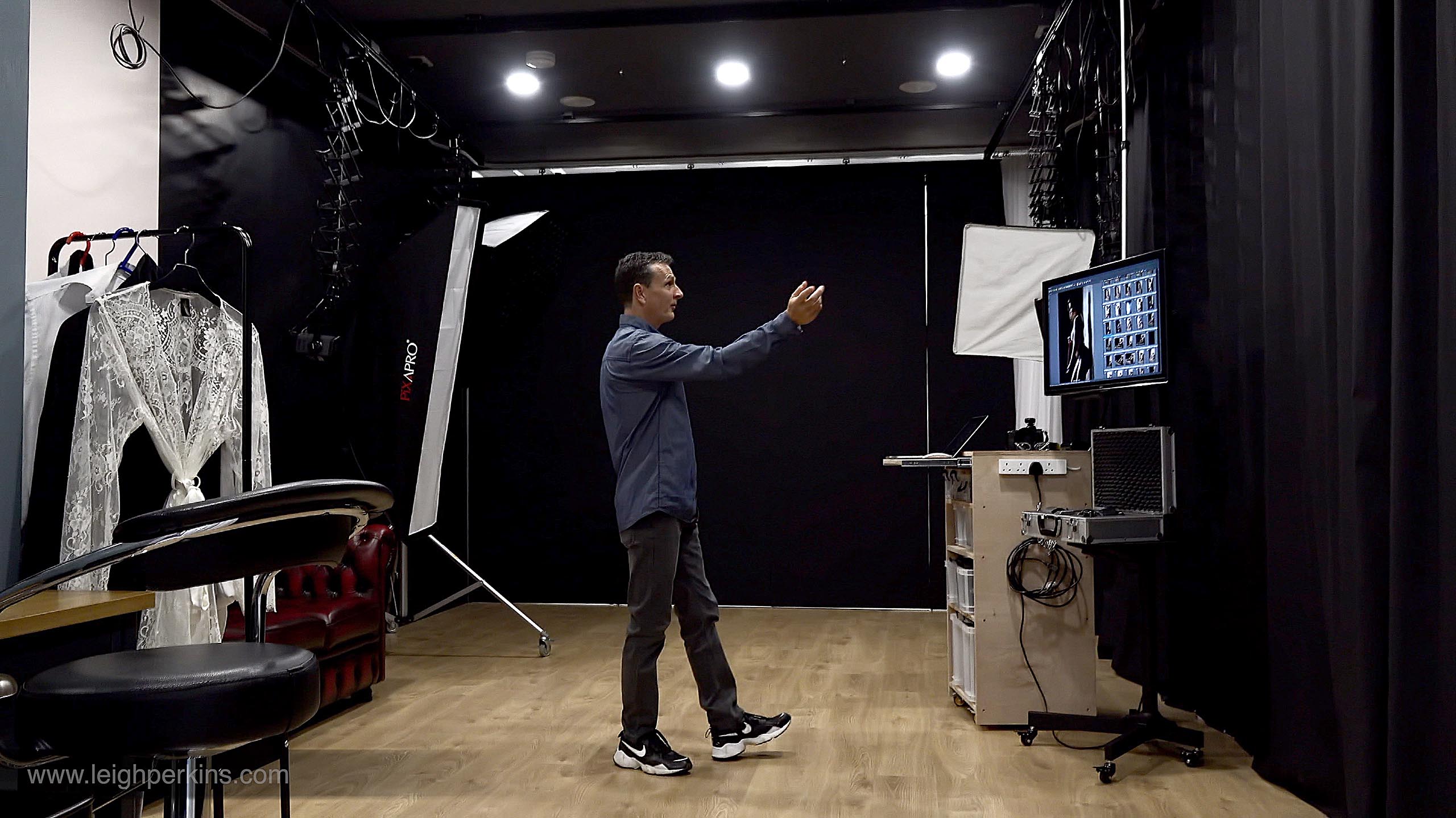 I always knew 2020 was going to be a tough year. Moving house and relocating my business 130 miles away was going to be challenging enough. Having to build a brand new studio from scratch whilst still working and shooting in some form or another was also going to be pretty demanding. All of this I was ready for and had spent months planning and preparing. But I wasn’t expecting March 2020 to be the month that everything else changed too.

On the 17th March, one day before my 53rd birthday, we took the long drive through England to the Welsh border and beyond and finally arrived and picked up the keys to our beautiful stone cottage. All our worldly possessions followed in a behemoth of a truck, which incidentally only had a 50/50 chance of getting up the steep narrow track to our new home!

My new studio was to be a purpose-built sixty square metre single story building incorporating a new office. It was to be situated on land, close to my new barn-conversion home, where there had previously been another huge barn. Planning permission from the local authority was granted shortly before we moved in so we were itching to get started. Sounds simple would it not be for a few rather impractical and potentially show-stopping drawbacks. Firstly, my new location is at the end a three quarters of a mile steep track, perched on the side of a hill some 200m up. The track is fine for cars – most of the year – a 4×4 is certainly a requirement in the ice and snow. Larger delivery vehicles wouldn’t find this quite so easy – you know the sort of stuff that delivers building materials for a new studio!

Once you get to the main site of our house, the studio site is still another four metres up from the parking area. Now that doesn’t sound like too much in the overall scheme of things, considering the climb already undertaken. However this last four metres was inaccessible by anything other than a mountain goat. Certainly nothing that was going to be bringing me 4m lengths of timber or a few tonnes of concrete was going to get close. But, there is always a way! I did eventually manage to get a small digging machine up there which was a godsend when it came to preparing the ground and digging out the foundations. But every single piece of this building had to be hauled up the slope by yours truly one way or another.

Surely the builders would be able to transport this for you I hear you cry. Well ordinarily, yes, but a small thing called Covid happened and 6 days after we moved in the whole country went into lockdown. So faced with tradesmen being unavailable or unable to work, I was left with little option but to move to plan B…build the entire thing myself. Sure it would take a while longer but how hard could it be? Very hard actually but fortunately at the time I had no idea, otherwise I may not have even started. 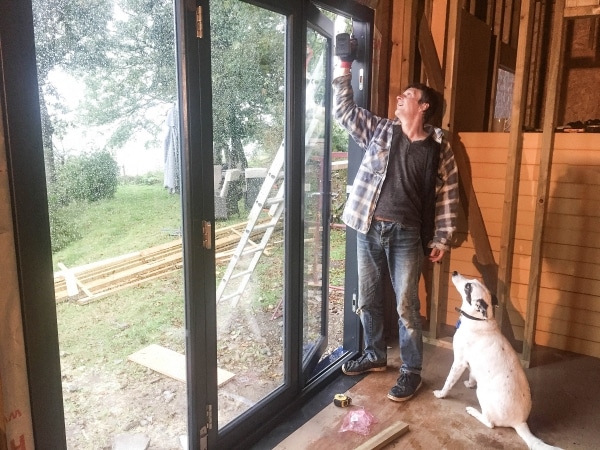 And so it was I turned from photographer to quantity surveyor, project manager, hole digger, carpenter, site manager, roofer, plasterer, painter and general labourer. All interspersed with the occasional bit of being a photographer! I was extremely fortunate to have some hands-on help from family in the first week of the build when movement between England and Wales was allowed. Throughout the remainder I had the invaluable assistance of my willing and able neighbour who was more than happy to fetch, carry, screw, nail and help in any way he could under my inexperienced guidance. And so after nine months of toil and struggle the studio was complete. Forty square metres of shooting space plus a sizeable office didn’t sound that much more than my previous space. But boy what a difference the extra ten square metres makes. Going from a space with 2.4m high ceilings to 3.1m is an absolute joy and opens up so many creative possibilities.

Extra space aside, seeing the ideas that were buzzing around in my head well over a year ago coming to fruition is simply awesome. The studio always needed to perform in several ways. It had to almost replicate my old studio in order for me to carry on with my successful boudoir photography business. It needed to be a creative space for me to be able continue running my NXworkshops studio workshops but with added shooting areas for more variety. It also needed to be large enough to be able to film the tutorial videos for Leigh Perkins.com. The latter was nigh on impossible in my last studio due to the dimensions, height and layout with staircases, doorways and walls all in the wrong places. Shooting angles were very limited!

Daylight too was something I had lacked for the last twenty years working in a blackout studio. My new space has a set of three bifold doors to let in an abundance of westerly facing light. And when not required a whole sliding wall 3m in length can simply be pushed into place with the effort of a single finger to cover the doors. Not just a daylight blocker, this wall was designed with a colonial wall panel effect which could be used as a new shooting space creating different room settings. The daylight option though was always something that had sparked excitement in me, but I was totally unprepared for the sublime results of my first natural light shoot in this new space. 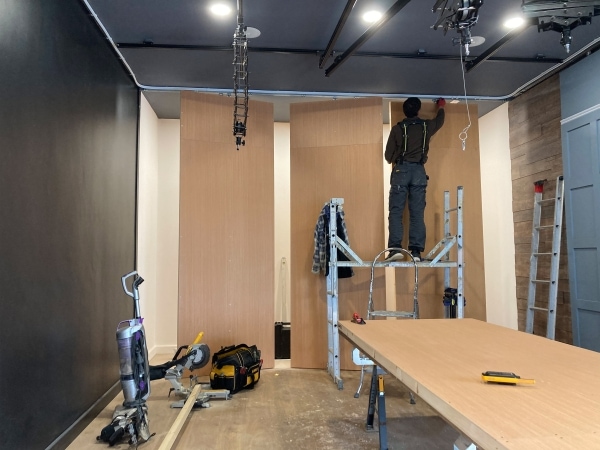 From a practical point of view, my new blackout panels that replicate the ones in my last studio also work better than anticipated. Four panels, just over a meter in width, and almost the full height of the studio, are each suspended from a single wheeled carriage in a ceiling track enabling them to slide in and out of position. When they are not in use they can rotate almost flat against the side walls to open the storage area behind or simply create a larger shooting area. With a white wall at the very rear, this can easily be used for some half length shots against a permanent white (or grey) backdrop. The panels are double sided with blackout fabric on one side and painted white on the other. This white side has been equipped with super strong magnets easily able to hold a fabric backdrop such as my brick wall curtain seen in many a boxing shot.

I still have my beloved black side wall for those standing splendid art nudes but gone is the damask wallpaper on the opposite wall in my previous studio. This has been evicted in favour or a “wood” planked wall. It’s actually a laminate product similar to laminate flooring but comes with a system of clips that allows for wall hanging and enables the planks to placed in three different positions away from the wall to give a three dimensional, rustic appearance (without the hazards of splinters, nails etc of real reclaimed wood). The overall look is one of a modern rustic appearance, perfect for either fashion, nude glamour or portraits.

You won’t be surprised to note that my wood effect floor is still a feature as is the black vinyl flooring perfect for the art nudes. The only difference with these is the width and length. Bigger is most definitely better!

A big plus which I did plan for very early on was to have no light switches or power outlets on any walls and thus getting into shot. These have been eliminated in favour of ceiling mounted outlets for the lights and wifi/voice controlled room lights. I didn’t realise how many extra miles one walks simply to get to a light switch every three minutes!

All in all the space is everything I hoped it would be, bigger, better and more versatile than my old space and given that I’ve only been shooting in it for a few weeks now I’d would definitely give it a five star rating had I bought the whole thing off Amazon!

Niggles? Definitely a few. Cable management on the lighting rig three meters up in the air is an issue but will be resolved with some planning. Storage space behind the blackout panels is too small so these will be moved forward in the coming weeks to accommodate this and a few other minor adjustments will be made. In the meantime it’s simply a question of playing with lights and seeing what else I can conjure up in my new shooting space. Stay tuned for more in-depth insights into my new shooting space soon 🙂

2 thoughts on “New Studio – A Walk Around Tour”