I’m sure I’ve said it before but I’ll say it again, I believe that keeping things simple is often the key to effective lighting and successful photography. Never has this been truer than in this series of posts from a recent location shoot. In this, the first example of sexy simplicity I set myself the challenge of using as little lighting equipment as possible and in doing so, prove that you don’t have to spend huge amounts of money on lighting and accessories while shooting outside of the studio.

And so we begin. My first task was to hang some blackout fabric across the full floor to ceiling patio doors to block out as much daylight as possible as we didn’t have any curtains we could close. Today, just when I didn’t want it the daylight was in abundance and it was mostly harsh sunlight. It was not required and it was mostly eliminated by my yards of theatrical serge fabric. My trusty speedlight sat atop a small fold-up tripod and connected to one of my studio radio receiver units via a sync cable. The diffuser was clipped to a lighting stand a foot or so in front of the speedlight and lighting tests began. I wanted a shallow depth of field so I could get the kitchen in the background to be well out of focus. I also wanted the props on the bench to be out of focus so I already knew that I was going to be stuck with my 85mm lens set on around f3.2 or lower. I wanted to pick up a little of the remaining ambient light in the room to help fill the shadows. As I was lighting Roxy from one side, this could have meant a very dark and gloomy setting if I didn’t get it right. 1/160s at ISO100 and the aforementioned f3.2 was giving me just enough ambience. I set the little speedlight into manual mode. I was pretty sure the TTL metering from 2003 wasn’t going work with my 2015 Nikon D750 and after a few test fires I settled for 1/16 power. This relieved me somewhat as it has been some time since I was reliant on battery power for my lighting. Blasting out 1/2 power or more on this little illuminator would have made for quite a short shoot or an endless supply the AA’s 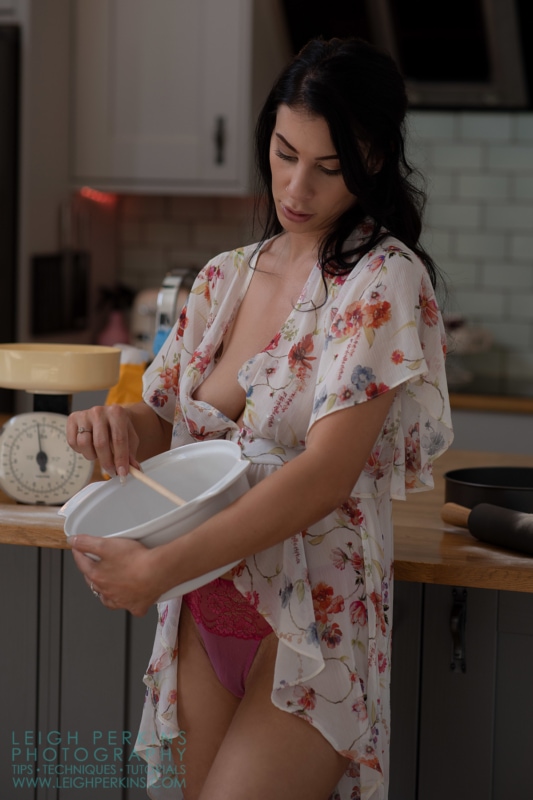 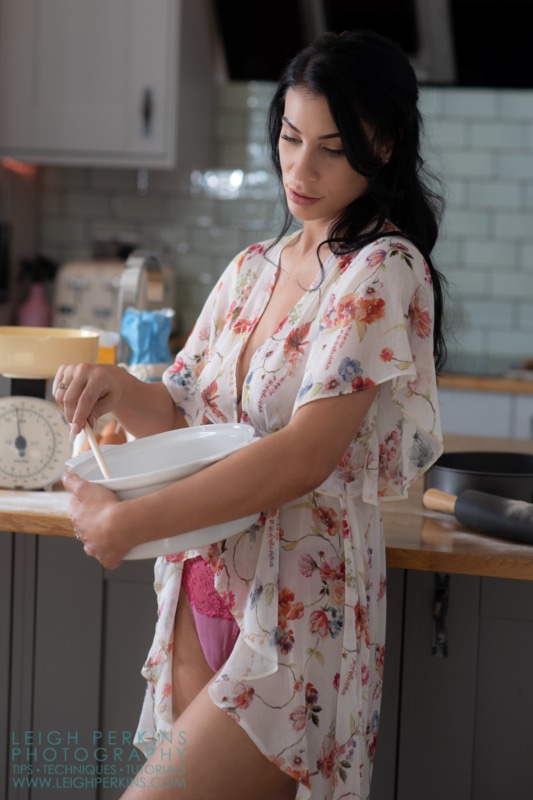 Diffuser, reflector or both?

The next part is quite interesting, well it is to me anyway. Roxy was being nicely illuminated from the flashes diffused through the diffuser…obviously. But a diffuser is a diffuser because it is only partially opaque. Being only partially opaque also means it’s slightly reflective and for today’s shoot this was a good thing. The flash and the diffuser (which is now also a reflector was placed a few feet away from a wall. The light from the flash that wasn’t diffused and sent on it’s merry way to illuminate Roxy and all her baking glory was reflected back and sent scattering around the room also courtesy of the wall behind the flash. The result was nicely lit Roxy and softly lit kitchen area albeit mixed with a little ambient daylight.  For comparisons sake you can see the before and after images here where one has been shot without the speedlight flash and the other with.  The speed light makes all the difference in illuminating both Roxy and the kitchen. All in all a very believable natural looking daylight and all from one little flashlight that thought it was in retirement.

The posing was perhaps the thing I hadn’t thought long and hard over as I rightly assumed that would be down to the model with a little direction from me. However, this wasn’t glamour or art nude or erotic…the posing had to be more natural, less contrived and portray a cheekiness and suggestive edge. Getting the right look in these poses was of course a collaborative process of trial and error but soon Roxy delivered the killer look I was after and armed with that knowledge she kept them coming one after the other after the other.

To get the final look I was after – that slightly retro, 1970’s feel – would of course need a little work in post. The colours, contrast and saturation of modern DSLR cameras and software would be too much for ye olde kitchen feel. I knew even before I’d taken the first shot what the end result would look like. It needed them to be little sat down on the contrast and saturation with a nice warm summery tone washed over the image. A little grain of course to simulate the good old days of film and maybe a smidgen of vignette to add to the ageing process.

After the tortuous process of whittling down the favourites to a manageable level, I set about editing a set of master files in my normal way. Remove the blemishes, tweak the colours and contrast levels and add a hint of skin softening to produce a set of “normal” images all via the magic of Photoshop. Second was to take one of these “masters” and bring it into Lightroom to have a play. Following a wee tweak to the white balance and “Presence” sliders most of the styling was done in the HSL/Colours options with a good dose of Split Toning added for good measure. A hint of Vignetting and grain were thrown into the mix and the whole kit and caboodle was saved as a preset to be repeated on the other edits. I will of course make this preset available in the downloads area. Adobe have made our life far too easy!

The final look was exactly as I pictured it in my head, soft, muted colours with a nice warm summery feel. The lighting is gentle and the suggestive sexiness is exquisite as is the hint of cheeky fun and double entendres.

I set myself this challenge to see what I could cook up with the simplest of lighting equipment. Hopefully you’ll agree that what started as a half baked idea resulted in some wonderful images. And now that I have used all the baking analogies that I can muster I shall leave you in peace to watch the video and peruse the images.